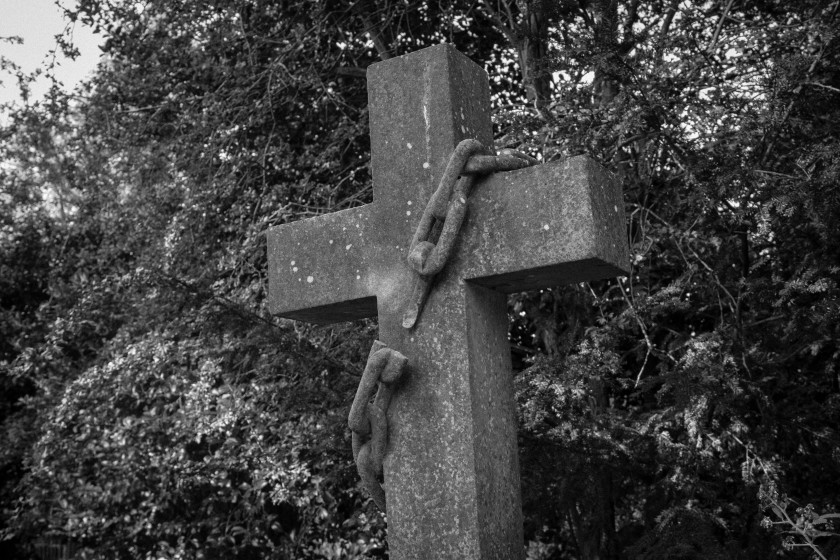 “Lilly, go play,” said Mother. “I saw some lovely little headstones on the way in. They’re just adorable. Go find me the prettiest one.”

Lilly glared at Mother, but reluctantly walked away. Her parents were combing out the details of Grandmother’s burial. Lilly wasn’t thrilled about coming along for the trip. She didn’t know Grandmother all that well and she didn’t grasp the whole “death” thing yet. Once Mother was out of sight, Lilly ran. She ran as fast as she could while doing her best to avoid flowers and tombstones. In the distance she could hear the ringing of church bells.

She came to a tree and sat to catch her breath. Next to her there was a headstone. A blank headstone. She didn’t think anything of it until she heard knocking. It was soft at first, gradually growing louder and louder. Lilly cocked her head as she tried to locate the noise.Then she cupped her ear and put her head to the ground. It became clear that the knocking was a wood-like sound. Coffin wood perhaps. She was about to write the knocking off as one of the many earthly wonders she did not yet comprehend when she heard her name. The knocking softened but from the ground came the faintest Lilly she’d ever heard. Again Lilly ran as fast as she could back to her parents. Tears streaked the apples of her cheeks as she made her way through the field. Her parents were standing outside the church talking to the minister. She leaped and wrapped herself around her mother’s leg.

“Lilly darling, there you are. I was starting to worry about you.”

She pulled away while keeping her wide eyed stare.

“Lilly, what’s wrong, love? Frank look at her. She’s as white as a sheet.”

Lilly nodded intently while keeping hold of her mother’s pant leg. Frank bent down and put a hand on Lilly’s shoulder.

“Hey, babydoll. There’s nothing to be scared of. What was it? What did you see?”

Lilly nodded and buried her face in her mother’s pants.

“Lilly, I promise that there isn’t anything scary about this place. Nothing at all. Let me show you. We can walk through and everything will be just fine.”

Reluctantly, Lilly pulled away from her mother. She took her father’s hand and together they started walking. By the time they got back to the tree, Lilly had nearly forgotten why she’d been so scared in the first place. Then, she pointed to the tombstone.

He bent over to look at the grave. He started wiping off the stone to reveal that it in fact had a name written on it. As he was wiping away the dirt, he heard it too. There was the knocking. Then a Frank came ever so softly from the ground. He put his head to the dirt to listen more closely. Immediately his head was swallowed whole by the dirt. Then his torso, then his legs. In a matter of seconds, Lilly watched her father disappear before her eyes.

Before Lilly could even process what happened, the name on the tomb revealed itself letter by letter as the dust blew away. Beneath it was written: “Frank Mckinney. Rest in peace.”