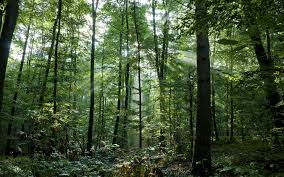 “The hell are you doing, kid?” Coy’s grumbling voice drifted up through the web of bare branches, words accompanied by soft, winter bird song, a trademark of the Fintareen world. There was a brief rustling in the wood above him before a bright blue head stuck through. Radox looked down to Coy, face upside-down and grinning madly, the black spines on his cheekbones glowing in the gathering dusk.

“Climbing.” Radiox replied. He dropped down a bit, legs hooked around the branch above him. “Come on,” he called. “Everything’s good now!” His voice was high and excited. “You can see New Home from here!” With a wink, Radox disappeared upwards, his giggles floating lightly on the crisp night air.

Coy heaved a sigh, shaking his head. He looked around, a light smile on his face. Even though the grip of winter had fallen upon the forest, everything looked as it always had. Small, glowing creatures drifted lazily in the slowly dying light, fern fronds over a meter tall waved their bracken colored stems in the breeze, spiraling towers of silver-fleck stones rising high above his head. The familiarity settled a pleasant weight in his chest, a blanket of warmth nestled around his soul.

“Alright, alright,” he said. “I’m coming.” Coy took hold of the twisting trunk of the tree and began to haul himself up. A soft, lightly hummed tune reached his ears as he climbed through the dense web of branches. A small smile again graced his features, then turned to a grimace when a purplish branch poked him in the eye. Muttering the same obscenities about the same types of branches he had for nearly twenty years, Coy pulled himself from the tangled wood.

Light burst from the darkness, the suddenness temporarily blinding him. Coy attempted to shield his eyes, but his arm was wrenched down by Radox. His noises of indignation were ignored, but soon his angry expression melted. The young Fintarean was practically radiating happiness, and it was hard telling if the glow on the spines of his cheeks was from the dark or excitement. Radox gestured outwards in enthusiastic motions. Coy followed the boy’s gaze and his breath caught in his throat.

A glittering pool of city sat nestled in a deeply forested crater, the silver metals catching the light of the setting suns. The dual stars stood like sentries over the buildings, a reminder that everything was protected, safe. Red painted the sky, melting into purple swaths the further it stretched from the suns. The two sat in silence for a long moment, watching as night fell across the land. Gentle breaths rose and fell in Coy’s chest, the sound of air escaping his mouth blown away by the wind around them. Radox was humming again.

Coy closed his eyes and smiled. He was finally home. New Home. As great as their King was, he wasn’t fantastic at names.