The idea of seeing a show up close and personal has been around for centuries, but modern technology has given it a new edge. Some of those cool things are the introduction of voice overs during the show, improved lighting, video backgrounds, and safe ways of suspending performers from the ceiling. Recently I attended a show with all of these features that goes by the name of…(*drumroll*)…Marvel Universe LIVE!

Marvel Universe LIVE! contains “25+ characters” and “1 epic quest.” As expressed in the title, the show is a live performance and fully takes advantage of a lot of the performance technology that has recently become available. The show is meant for a family audience so the jokes are PG rated, but they still contain small references that can only be caught by older viewers. Even without being a genuine fan of the Marvel universe, someone can still enjoy the performance and even some of the various puns. But that’s part of the reason why this article is being written: so that I can inform you of the pros and cons to see if this show is right for you. 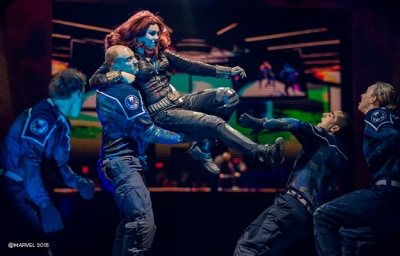 Pro: The Decorations in the Lobby

This technically isn’t part of the show, but it was still appealing. Even though I wasn’t transported into a “whole new world,” I still enjoyed the efforts that were made to incorporate the Hulk into a hat for employees to wear. So while the Spiderman webs hanging from the toy carts and the Marvel posters pasted everywhere were cool, maybe it was the suffering-glint in the employee’s eyes as they tried to sound enthusiastic with Thor on their head that really got me going.

Con: A Lot of the Attendees (Especially the Screaming Kids)

I understand that a show like this would draw in little kids, including my brother, but you can only get pushed by so many little Ironman’s before you start to lose your patience. Ironically, the only place that wasn’t crowded was the woman’s bathroom. While walking to the security guards to have them check my ticket, Soccer Mom #1 with the Unneat Bun bumped me with her purse. While walking up a set of stairs to get to the floor that had my seat, little Ironman, Hulk, Spiderman, Thor, Black Widow, and probably the whole Marvel Universe knocked into me. There were polite people that tried to stay out of my
way, but for the most part we were all so crowded together that it seemed like we were trying to imitate the codependency of Dean and Sam Winchester from Supernatural. One of the worst parts had to be when I was standing in front of the toy cart to wait for my brother to pick something and Soccer Mom #2 with the Messy Bun and Mismatched Outfit, reached her arm so close in front of my face to point at something that I could see the mustard stain on her lavender cardigan, and smell the unpleasant scent of baby wipes mixed with olive oil. I still haven’t let that go, Soccer Mom #2.

I was even further immersed in the show when I had the experience of slurping syrup out of Spider-Man’s head. I had finally caved in to the yelling and coaxing of the walking employees and decided to purchase a snow cone during an intermission. While the snow
cone itself wasn’t that good, it’s cool to have a Spider-Man head as a souvenir. I do have to wonder how many people have spent their money on this though since it 1. wasn’t very filling, and 2. was one of those purchases that while it doesn’t really mean much, it seems to make me think back and wonder if the money spent in the heat of the moment was worth it.

This is something that varies depending upon your own personal experience, but the cost of my family going was more expensive than some people would like to spend. The cost of four front row seats was about $360 — which is $90 each. I’ve listed this as a con because while my family was fine with this, it could be a deal breaker for other people. Front row seats gave us what we thought was the best experience, but it could still be fun for anyone anywhere that they may be seated. The problem with being in a different seat is that you may not be able to see all of the performance details and actors’ facial expressions, the person in front of you may be too tall to see over, and these problems are even more apparent when you’re faced with the fog that blows out fairly often due to performance enhancement. I personally loved my seat, but as always when you’re making a purchase, you have to figure out how much you’re willing to sacrifice for the sake of entertainment.

Pro: The Show Itself

Despite the cons that I’ve listed, I would definitely go to the show again and my family has agreed with me. It did at times feel as if the intermissions in the beginning were dragging on, but the show was a very enjoyable two hours. It’s background info was presented like a story by using video and voice over to make it seem like current news channels were speaking about a catastrophe happening in our world. The characters in the show had a 70’s-action-movie-flair and entered by flipping and jumping and climbing over ramps. Their actions were very exaggerated, but that added to the appeal of seeing a performance. Not only was there an actual plot to the show, but the large amount of action enhanced it instead of seeming to be random additions. The performers hung from the ceiling, rode around, did tricks on motorbikes, fought each other, and told amusing/horrible puns and fighting lines.

Like with the performers it’s obvious that the crew cared a lot about the production. The costumes seemed straight out of an action movie, the fighting choreography and stuntswere really entertaining, and the special effects helped the show. It was just really awesome to see and to know that there are people who care about the production of a show being amazing. It’s pretty rare that I have no issues with a show, but with this one I couldn’t really find any faults. There were no mistakes (that I know of), the story was organized and not just random fighting scenes with no connection to the plot of the show, all of the audience seemed to be completely entertained, and afterwards I kept replaying parts in my head that stuck with me. Not only do I give this show an 8/10, but I also recommend it to anyone who is into family-rated live action shows — and wants a Spider-Man head you can drink out of.

Live shows definitely aren’t for everyone, but they continue to be an element of our society that is still revered by many. Maybe it’s the sparkling lights, dazzling acting, and special effects — maybe it’s even the parts of the show that we personally think suck. Seeing a show live gives the audience a feeling of being connected and involved with the show. To many, the talent that it takes to not (noticeably) mess up and to nail a performance every time without the use of editing makes live shows more impressive than recorded shows. Either way, there most likely won’t be an end to live shows anytime soon. We seem to need this connection to the past that improves as time goes on. As long as people are still willing to use art to express culture and thoughts, and are willing to choose spending their money on shows over other things, the live show experience that we have today will not only continue, but also continue to get better.

Alanna Anderson is a Sophomore at Barbara Ingram