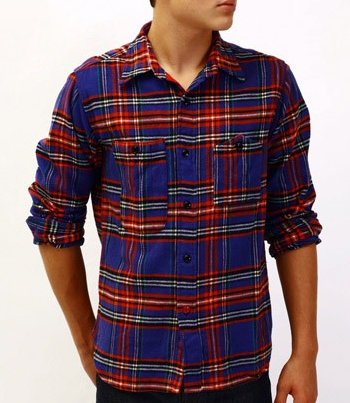 Flannels, plaids, tartans– whatever you wanna call them, they’re everywhere and everyone wears them. Confused dads with fanny-packs and vests wear flannels; hipsters pair their plaid with vans and whiny voices claiming that they listened to Bon Iver before anyone else did. Greasy-haired, Kurt-Cobain loving people wear flannels over band t-shirts. Kylie Jenner wears her plaid tied around her waist and people who want to be like Kylie Jenner wear their plaid the same way for $300 less. 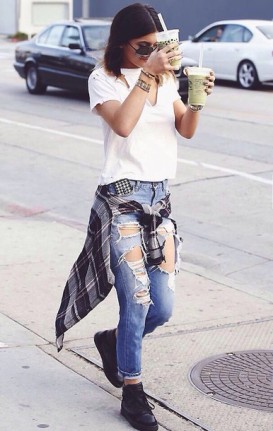 There is not one group of people that tartan is not advertised to. L.L Bean, the nerdy parent store, sells plaid shirts by the thousands. Forever 21 and H&M sell it to the youngins. Even obnoxiously expensive companies like Burberry and Chanel sell plaid to its obnoxiously rich customers.

The question that is banging its head against the wall, wanting so desperately to be asked, is why? What is it about flannel and plaid that everyone loves? Why is everyone going loony over this specific geometric pattern?

The answer may never be learned, but we can still investigate why the world is doused in plaid (and we will).

There are several clumps of people who started this flannel-fever, and it actually wasn’t the hipsters that did it first. Scotland in particular can be accredited for tartan. Way back when, before the mid-1800’s, tartans were crafted by local weavers and could be used to identify towns and general regions of people. This is partially because the dyes would have to be local, and partially because tastes and styles would differ from town to town. Though it is definitely rude in 2015, sometimes we can see people and identify where they are from based off of their style– for instance, if someone is wearing an organically-dyed maxi skirt and Birkenstocks, they are probably from Shepherdstown. When people wear denim shirts on top of blue jeans, they are trying to tell you that they are from Canada and the people who wear leather hats are almost always from your local Harley Davidson store.

After the 1850’s, there were more machines and available materials, such as dyes and fabrics. It was much easier for weavers to make family-specific tartans, and so many families had patterns unique to their family. If someone from nineteenth century Scotland were to time-travel to today’s time, they might start giving everyone hugs. For all they know, you’re their brother from another mother.

Another group of people who are strongly associated with plaid are the lumberjacks. Go ahead, search ‘lumberjack’ in your Google search bar. Every image is of a ripped hipster, complete with a pair of suspenders and a beanie and a beard and, most vital to the success of this paragraph, they are all wearing flannels! Part of the reason that the lumberjacks loved their flannels (and probably why so many people have become attached to their plaid shirts) is because of the comfiness factor. Lumberjacks would often live a migrational life, traveling from place to place and chopping down trees where they could find them. This meant that they had a rough time finding someone to love on them in the colder months. For this reason and this reason only– the lack of a lover’s warmth– lumberjacks would want to stay warm, and would use this blend of geometrically-woven cotton to do so. Maybe this is why everyone is wearing flannel all of a sudden– because they are single and therefore rendered perpetually cold.

A lot of people believe that those with symmetrical faces are more beautiful than people with regular faces, and this has been tested with science. According to a study by Anthony C. Little, Benedict C. Jones, and Lisa M. DeBruine on facial attractiveness, humans tend to lean towards people who have symmetry in their face due to Evolutionary Advantage. In essence, this means that we find will typically find someone who has eyes that are evenly lined up more delightful to look at compared to someone with eyeballs all over their face in uneven proportion because subconsciously, we see that person as a potential mate and we want our potential children to be perfect. At this point, you may be wondering what this has to do with plaid. I’m not so sure anymore. But, I think that one reason plaid might be coming back in such a big way is because it tends to be symmetrical. We like plaid because it is a good potential mate.

Whether people are wearing plaid to look like another Kardashian or because they liked it before it was cool, plaid is here to stay. The Scottish started it, the lumberjacks perpetuated it, and Beyoncé probably wore it better.  If you are a lover of plaid, you’re in luck! Plaid is here to stay, unless we make something else popular– something weirder than lumberjack-chic. Maybe plumber-chic? We can all have plumber’s cracks. It’s a real cute idea.

Amelia Lowry is a Sophomore at Barbara Ingram